Formed in 1983 to purchase British Railways (W) Manor class 7820 Dinmore Manor from the Gwilli Railway for the West Somerset Railway, the Dinmore Manor Fund completed the restoration of the engine in 1995 and shortly after joined with the 3850 Preservation Society to form today’s Dinmore Manor Locomotive Limited (DMLL).

‘Dinmore Manor’ returned to traffic following overhaul in 2014, this time at the Gloucestershire Warwickshire Railway. DMLL has subsequently made its home at Toddington on the GWSR, and after a brief visit for a gala in 2014 to bring the engines together for the first time, 3850 retired there at the end of its ticket in 2015 before it was stripped down for heavy overhaul, where it is to this day. 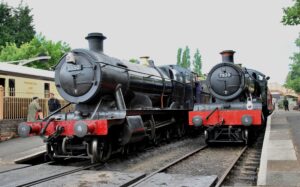 7820 ‘Dinmore Manor’ continues in regular service at the GWSR and is popular performer amongst crews and public alike, although it has also made frequent short and longer visits away to many of the UK’s premiere preserved railways, including its former long-term home of the West Somerset Railway.

DMLL’s stated commercial strategy is to have two locomotives in traffic with a 3rd under overhaul at any one time. To accomplish this, two further GWR 2-8-0’s were added to the fleet in 2009; no’s 2874 and 3845. In 2016, 2874 was ceded to the 2874 Trust, an independent charity, in order to take advantage of grant funding that DMLL could not apply for. DMLL still remains closely linked with the charity, and is expected to operate the engine upon completion of the restoration from scrapyard condition.

DMLL’s aim is to have a stable of locos earning the funds to ensure an on-going, sustainable future for these wonderful examples of British Engineering and design.  The locomotives require a heavy overhaul and boiler restoration at least every ten years  – both costly undertakings.  DMLL believes the best way to ensure future viability is to have locos earning to pay for current work on other stock, thereby ensuring the “dream of steam” remains a reality for future generations.