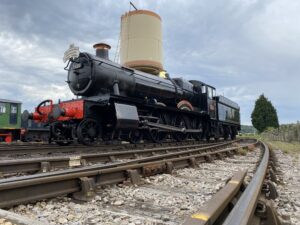 The Manor class of the Great Western Railway was designed and developed to provide the railway with a powerful yet lightweight modern engine, primarily for the weight restricted secondary routes which it found itself inheriting many miles of in 1923.
Developed from the earlier Churchward 4300 class, a design that had long enjoyed much success but lacked the power for the heavier trains, parts from 4300 engines were incorporated into new Grange and Manor class engines.

These engines were near identical in the chassis to each other, but the Manor’s unique smaller no.14 boiler made them perfect for the lightweight routes.

20 Manor class engines were built in 1937, nos 7800-7819, however the outbreak of war in 1939 postponed the building of a proposed second batch of 20 further engines. This batch was finally built under British Railways at Swindon in Nov-Dec 1950, starting with 7820 ‘Dinmore Manor’, but resulted in just 10 being built in the end. Further engines were not built due to British Railways favouring the Class 4 Standard Locomotives instead. Initially the Manors were not favoured by crews, gaining a reputation for poor steaming. However, extensive experiments with the draughting arrangements on classmate 7818 ‘Granville Manor’ in 1952 led to a new design of blastpipe and chimney, and to the increase to the levels of performance and free steaming for which the Manor class is known today.

What’s in a name? 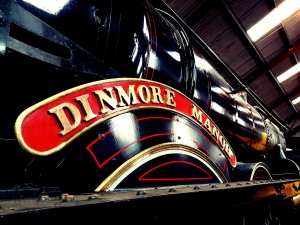 When originally proposed in 1939, 7820 was originally due to carry the name ‘Henley Manor’ after the Oxfordshire stately home of the same name; this would have carried on the alphabetical naming series from 7819 ‘Hinton Manor’. However, after a letter from the lords of several manors, the names of the new builds were revised to include a start with Dinmore. The ‘real’ Dinmore Manor is a 14th century stately home in Herefordshire, near the village of Hope-under-Dinmore, and still stands today as a private residence.

Outshopped from Swindon Works on 20th November 1950, 7820 emerged as the first of the new batch in then standard British Railways mixed traffic lined black, the livery that she wears currently. She was allocated initially to Oswestry, with a brief period at Aberystwyth, for service over the tortuous and demanding Cambrian routes of mid-Wales and down into Carmarthenshire, before returning to Wolverhampton Stafford Road for a heavy intermediate overhaul in 1953.

From here she was have been outshopped, this time in plain black (as carried in preservation from 2014-2018), and sent back to Oswestry. In December 1954 she became a Plymouth Laira Engine, regularly to be seen working local or intermediate trains, or piloting express trains over the fearsome south Devon banks into Cornwall.

Here she spent the next 6 years, with other allocations to Truro and St Blazey in Cornwall, as well as trips back to Swindon Works for overhaul. It is here in 1958 that she probably gained the lined green and Late crest livery, (which she carried in preservation during her time at the WSR, from 1995-2004) before returning to the South West again. 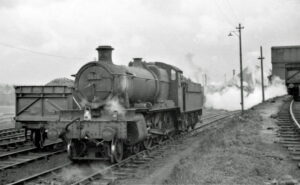 From 1960 she returned to Wales, this time to Cardiff Canton, as well as spending time at Swindon, Westbury, and Plymouth for attention. It was in April 1963 that she began her association with Shrewsbury Shed and the Cambrian system, replacing withdrawn older members of the class, and where she went on to work the last Manor hauled Cambrian Coast Express in 1965, which was to mark the swansong of the class.

The move to Shrewsbury would prove to be her saviour, as she was withdrawn from the Shrewsbury shed on 6th November 1965, and was towed in convoy in May 1966 with other Manors from the shed to the infamous Barry Scrapyard in South Wales. In that time, she is estimated to have covered well over 420,000 miles.

‘Dinmore Manor’ left Barry Scrapyard in September 1979 as the 104th Engine to leave the yard. Initially she was purchased by and moved to the Gwilli Railway in Carmarthenshire, but unfortunately no work was undertaken there. A group was formed by West Somerset Railway volunteers to buy the engine and 7820 was moved to Minehead to begin its restoration by the new Dinmore Manor Fund in March 1985. Whilst work was initially slow, the engine was moved to the then new Tyseley Locomotive Works in September 1990 for a more rapid restoration. The engine’s return to steam in 1995 marked not only an historic moment for the WSR, the engine being the first large GWR designed locomotive restored to run on the railway ( S & D No 53808 was completed in 1987), but also it became the first completed major project for the fledgling Tyseley Locomotive Works, still a nationally recognised centre of excellence today.

7820 gave 9 near faultless years and 78,635 miles of solid work at the West Somerset, being a mainstay for many years until July 2004 when it was withdrawn for heavy overhaul. After an enforced period of storage at both Minehead and Williton, 7820 returned to Tyseley Works for work to continue in earnest in 2010. Its service in BR, its time at the scrapyard and 10 years of holiday makers’ trains in Somerset had taken their toll on the engine. The work required to bring her back into traffic required extensive boiler work at Ian Riley and Son’s boiler works in Bury, considerable attention to the valve gear, a new tyre on a heavily worn wheelset plus reprofiling of the others, and many other investments to ensure the next period in traffic would be trouble free. 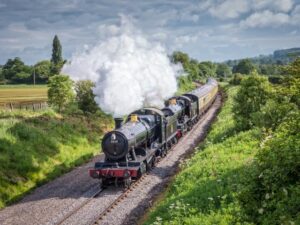 7820 returned to steam in April 2014, this time at the Toddington-based locomotive works of the Gloucestershire Warwickshire Railway. Whilst many on the WSR and the owning group were sad to see the engine leave the railway, somewhere it had called home for 20 years, the move to the GWSR allowed the engine to be closer to the vast majority of the DMLL volunteers, as well as the group’s restoration base in Worcestershire, and gave the company the financial security to guarantee the overhaul of the group’s other assets.

Outshopped in BR plain black, a preservation first, and paired temporarily with the tender from GWR ‘Dukedog’ Class 9017 ‘Earl of Berkeley’, she quickly became popular in the preservation world. As well as making her debut on the GWSR hauling services, she made a number of preserved railway visits, another first in her own preservation career, by starring at galas at the North Norfolk Railway and at her former home the West Somerset Railway in 2014. She also visited the Great Central for their winter gala, the Epping and Ongar Railway, Paignton and Dartmouth Steam Railway, the Battlefield line, and took part in the Severn Valley Railway’s homage to the Cambrian Manors and the 50th anniversary of their withdrawal in November 2015 before returning home to the GWSR.

2016 saw another preservation first. ‘Dinmore Manor’ joined classmate 7822 ‘Foxcote Manor’ at the Llangollen Railway’s ‘Along Cambrian Lines’ gala, a homage to the legendary Cambrian Railway system to which the Manors are forever associated. It also offered the unique opportunity of pairing two plain black liveried Manors together for the first time in preservation.  Later that year 7820 spent the second of its 2 summers working on the Paignton and Dartmouth Railway to help cover their summer timetable, and was there reunited with former shed-mate 7827 Lydham Manor. 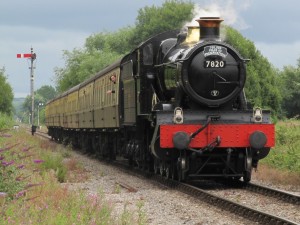 2017 saw her spending the first half of her year at the GWSR, and a new tender for the Manor entered into traffic, just in time for the GWSR Gala. Tender T2928 is a former Collett 4000 gallon tender, rebuilt to 3500 gallon configuration. She then returned to the WSR for the summer. Here she passed her own milestone, where she clocked up her 100,000th mile in preservation, fittingly on the line where she first ran in preservation.

That summer she also rubbed shoulders with a celebrity, running alongside ‘Flying Scotsman’ and even coming to its aid on one occasion in the rain! After a period back at home in Gloucestershire, she made the trip to Staffordshire to the Churnet Valley Railway, where she took on the fearsome Ipstones bank; 5 miles of 1 in 40, unfortunately as close as 7820 will ever get to reliving her days on the Cambrian slogging over Tallerddig bank.

With her paintwork now 4 years old and many miles under her belt, the opportunity was taken to give 7820 a facelift. The locomotive livery was back dated to her ‘as built’ condition of lined mixed traffic black, in time to be paired with BR Blue liveried King Class King Edward II at the GWSR Gala in May. She also had the honour of pulling the first (non-public) train to Broadway on the newly opened GWSR extension to Broadway, being amongst the first steam engines to travel back there since steam vanished in 1963.

In 2019, 7820 enjoyed a well-earned rest from visiting, whilst DMLL concentrated efforts on progressing work on engine 3850. However, a brief return visit was made to the Battlefield line again to support their 50th Anniversary Gala, alongside newly finished 6989 ‘Wightwick Hall’. However, she put in nearly 100 days at the GWSR that year as our home railway goes from strength to strength. 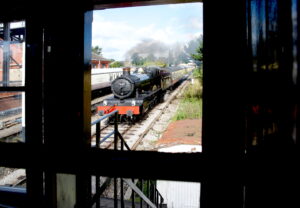 Despite the worldwide situation in 2020, ‘Dinmore Manor’ has been far from inactive. She is still regularly hauling trains along the picturesque Cotswold edge between Cheltenham and Broadway. Being active in the early season before lockdown as well as being the first locomotive to move after the resumption of services has meant she continues her impeccable record of never being inactive longer than necessary and remains a credit to all those who work on her.

7820 is due for withdrawal with the expiry of its boiler ticket towards the back end of 2023, however it is anticipated that she will not remain quiet for long. The ongoing maintenance and the thorough nature of her last rebuild should ensure the next overhaul is a quick turnaround and she can continue plying her trade in the Cotswolds for years to come.